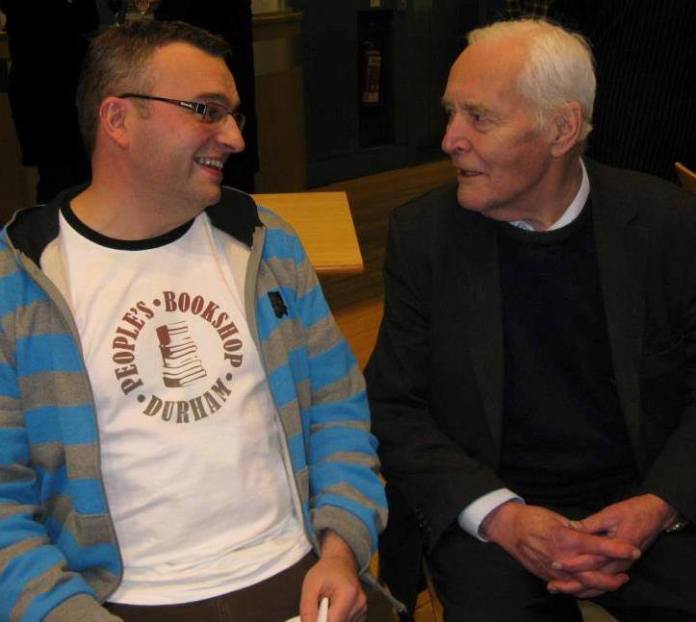 It was a year ago today that we heard the news that Tony Benn had died. I don’t do heroes as a rule. I’m of the opinion that movements change the world, not individuals. But Tony was obviously very special. A great communicator of simple, socialist common sense. Some people wanted more than that, and I can understand that – but to me, that is the thing that is most needed at our end of the political spectrum.

He was also a deep-down kind and generous human being. A few years ago, when this photo was taken, I had written to Ruth Winstone, asking if Tony wanted to visit the People’s Bookshop. She explained that Tony was too frail to get up the stairs, but would love to meet me before his gig at the Gala Theatre in Durham. When I got there, my heart sank. He was surrounded by dignitaries and Labour councillors (quite a few of them nasty, austerity-happy old rightwingers). Someone was wearing a silly chain around their neck.

Ruth spotted me, and had a word with Tony. Like a flash, he extricated himself and found a spot for me and him to have a lovely chat. I know I wasn’t special in this kind of treatment, it’s just that he had an enormous respect and understanding for activists, people who campaigned and got things done. And he had no time for those people who wrapped themselves in the Red Flag, but fundamentally sought the trappings of power and fought for no one but themselves.

But more than the personal stories, Tony Benn leaves us with a moral. And that is partly to do with the fact that, despite all his oratory, all his wisdom and foresight, Bennism was a cry in the wilderness. Why? Because we thought Tony Benn could do it all for us – we were his audience – and we forgot to keep building a vibrant, political movement on the ground. Tony realised this himself, and he was keen to quote Lao Tzu whenever he could on leadership:

“A leader is best when people barely know he exists, when his work is done, his aim fulfilled, they will say: we did it ourselves.”

Leaders may have their role in encouraging others, but at the end, it’s down to us to get together (in whichever ways and in whichever forums we choose). We have to get ourselves organised and build from the grassroots. Everything else is just for show.

2 thoughts on “Remembering Tony Benn – a year on”