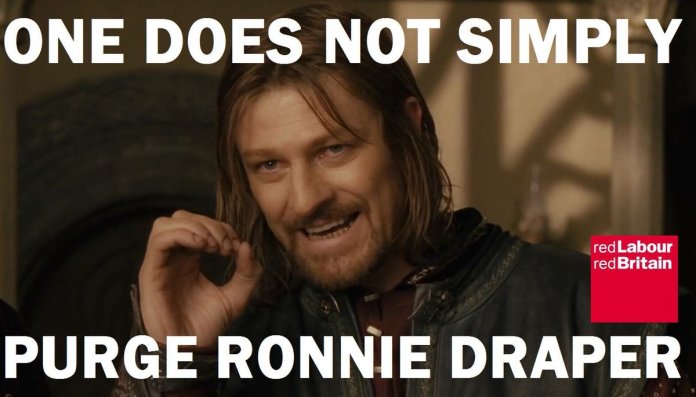 Recent days have seen a ratcheting up of the row over exclusions and suspensions from the Labour Party during the leadership election. This is almost a seamless continuation from the so-called #LabourPurge of last summer, with the difference that there is even less hope of it actually altering the result of the election, which Jeremy Corbyn seems set to win with another landslide.

I don’t want to discuss the underlying reasons or strategy behind the continuing purge, except to say that, without the prospect of it altering the result, it’s self-evident that this is about demoralising new members and the majority Corbyn supporters amongst them, in order to derail the project. In the meantime, however, I’m left wondering what this is doing to our party – and that is the issue that I want to address here.

In particular, the cases of Ronnie Draper and John Dunn have highlighted the blunt tools being used to pursue this purge of members. In many cases that have been highlighted over the last few days, the reason cited has been unspecified tweets, stretching back to as long as three years ago. To carry out this sort of operation, it’s clear that software has been used to dig up the dirt. Apart from being an enormous waste of resources, the problem with using ‘trawling’ software to exclude, suspend or expel members from the Labour Party is that context is everything. Trawling software goes through people’s Twitter and Facebook accounts looking for ‘keywords’. There are varying degrees of sophistication, but it looks like Labour Party HQ is resourcing it heavily in this leadership election, as opposed to last year’s fairly amateurish efforts.

This trawling is undoubtedly being used to flag up so-called abusive terms by members of the Labour Party which break rules imposed by the NEC and being enforced by the compliance unit. Various reports have suggested that the terms being searched include “traitor”, “scab”, “bastard” and (most unbelievably) “Blairite”. We’re not quite sure whether it’s a particular combination of these terms or use of them that creates a disciplinary issue, because the process is completely opaque. There even seems to be a wider net being cast, based on generalised ‘bad language’. You would think that this would only apply in specific cases where it is directed at a particular person within the party and in a particular context, but one case has already become notorious, where a party member appears to have been excluded for her over-enthusiastic support of the Foo Fighters.

Ok, so that will be found to have been a silly mistake, but here’s the more serious problem. These aren’t black and white terms, nor is the use of them straightforward. To take an example, is the use of the word ‘traitor’ always unjustified? It’s an opinion, fundamentally. One that certainly can be used as a term of abuse, but what if it’s used against an unnamed collective of people who dragged the party into the Iraq War, for instance? Some people (myself included) might not find that a very useful critique. For me, Blair’s Iraq adventure was about something deeper than merely betrayal, but I don’t think it’s an illegitimate point of view. Is it automatically abusive? I wonder how many times poor old Ramsay MacDonald was called a traitor? Would anyone seriously suggest that it was an illegitimate term for him? Why should Blair, or anyone else in the party, be exempt?

As for some of the other terms being floated as possible reasons for suspension, they range from the flimsy to the downright absurd. ‘Bastard’ and ‘Scab’ might not be the friendliest terms to use about our fellow citizens, but in the real world, they are used in every home and in every pub, about every faction in the party and most likely about every MP. There will always be an unjustified use of these terms, and probably a fair few times when they can be backed up. Some people have an inbuilt sense to avoid using these terms, probably borne out of political experience, but many others speak the same way on social media that they do at home or in the pub. To expect everyone to act as if they are a public representative is pretty naïve, and at its worst makes us seem like a party only suitable for those already formed, perfect political specimens who never get angry and certainly never express it. Real life isn’t like that and I’m not sure we’d want it to be.

The more pernicious side of this policing is that it is actively encouraging a politics of ‘doing each other over’ or what we might call the ‘Guido-fication’ of the Labour Party. Guido Fawkes is a Twitter-based project which seeks to ‘out’ politicians and political activists, who – according to their Thatcherite moral universe – have transgressed the norms of political discourse. Their most recent speciality is finding long-forgotten tweets by Corbyn supporters (especially prominent ones) which can then be used against them – for instance, issuing solidarity to students in the midst of the demonstrations which turned violent in 2010. It’s a world where no one should have a political past, there should be no development of ideas, strategies or tactics – only a static, political ideology which can then be used to “haunt” you in future years.

To Guido, all activists must behave, and always have behaved, in a manner suitable for high office (because that’s the only reason to be involved in politics, right?). What this subtly does is create an anti-activist culture, which sees politics as an establishment activity. If you are brave enough to challenge that ‘common sense’, prepare for an almighty shit storm. This culture, of course, has been replicated in the Blairite Labour students section of the party, and in NUS, which it dominated for so many years: it was and is a culture of spying, reporting and more recently screen-shots. A culture where suspicion and threats held sway and delivered for the right and the careers they were building.

On the absurd end of the spectrum, the term Blairite is being redefined as “abuse”. In some ways, this merely goes to show that New Labour is dead and buried. A few years ago, those on the right of the party were proudly calling themselves Blairites. Now they want to redefine it as a term of abuse. Whether this is actually a term they are trawling for, I very much doubt, but certainly many New Labourites have been complaining about the use of the term for some time. But Blair was the leader of the party, the Prime Minister and the main architect of New Labour. Blairite is no more a term of abuse than Wilsonite or Gaitskellite was. It’s an academic term for those who adhere to Blair’s politics. Whether it’s misused to refer to anyone to the right of the Corbynite project is an altogether different issue. That may be a question of political education, but it doesn’t make it abuse as such.

Now, obviously, there comes a point when any pejorative term can stray into abuse. If someone continually harasses an MP, for example, with the term traitor, if it’s aggressive, personalised and vindictive – then I for one would not defend them. But it’s all about context. Through a trawl on Twitter, the compliance unit can undoubtedly pull out the required quotes to ‘nail’ someone, but they can’t possibly know the background, what happened before and after – in other words, the context. Natural justice requires that we understand the context of any crime or transgression of the rules, which is why we have courts and tribunals. A system which excludes people from voting in the leadership election, pending appeal, would seem to fly in the face of natural justice. A retrospective appeal won’t restore someone’s voting rights, nor compensate for the distress caused while suspended – not to mention the reputational damage. For registered supporters, they don’t even get the right of appeal. That simply can’t be right.

Whatever happens over the next few weeks, we need to look again at how we do ‘compliance’ in the Labour Party. I always think cultural change is more important and effective than imposing rules, especially ones as bureaucratic as this. Of course, we need to get to the point where we can debate across different sections of the party in a way which is comradely and productive. For that to happen, bureaucratic solutions must become an absolute last resort and we must foreground efforts to stimulate debate, something which the ban on CLPs meeting over the summer has hardly helped. Also, we need to ask whether the current set up is even appropriate for a party which has doubled in size and which is evolving both organisationally and politically, at a startling speed.

Of course we need rules, guidelines and standards for the way we treat each other in the party and the movement. But those rules must be interpreted in a way that understands today’s world, how social media works and crucially, the context of what is said in those platforms. Overall, Party HQ must act in a transparent and open way. The machinery of the party, and compliance in particular, should never be (mis)used as a political weapon of one faction of the party. Once neutrality is compromised, all trust is drained out of party staff and the machinery of the party. It then becomes a perpetual fight between the party apparatus and the membership. If there’s a quicker way for the Labour Party to descend into civil war, I’m yet to spot it.

A curious notion that is seemingly gaining traction is that under Jeremy Corbyn, Labour still essentially stands for the same polices as we did under Ed Miliband. So here’s my attempt to set out some clear differences, which I believe represent substantial improvements in several key policy areas.