Back in 1992, I wrote to Tony Benn. I was living in Leeds at the time and had just left the Militant Tendency. For me, at that age and in those circumstances, it was a big deal. The split between those who’d argued for staying in the Labour Party and those who thought the future lay outside had just taken place, but the rancour remained. I’d had enough of the whole thing. My experience of Trotskyist organisation had exhausted and disillusioned me, but still it was difficult. I was leaving many friends behind and all the things that I had thought were important.

I wrote to Tony to vent my spleen, essentially. I was bitter. I couldn’t work out what place Militant’s philosophy had in the party, and I was left with the feeling that Trotskyist groups could only be wreckers, living off the good work that the Labour Left (represented by the Campaign Group at the time) did. I wrote him a lengthy, somewhat pretentious letter. To my surprise, he responded straight away, not once but twice. I had met him only briefly, we had no relationship as such, but despite this, he took the time to give me some advice that it took me a little while to process, but keeps coming back to me.

In his first letter, he said:

“I think we’ll have to argue it out and if, as you believe – probably quite rightly – that the long term aims of Militant are not realistic, then we don’t really have to worry about what they are saying.” 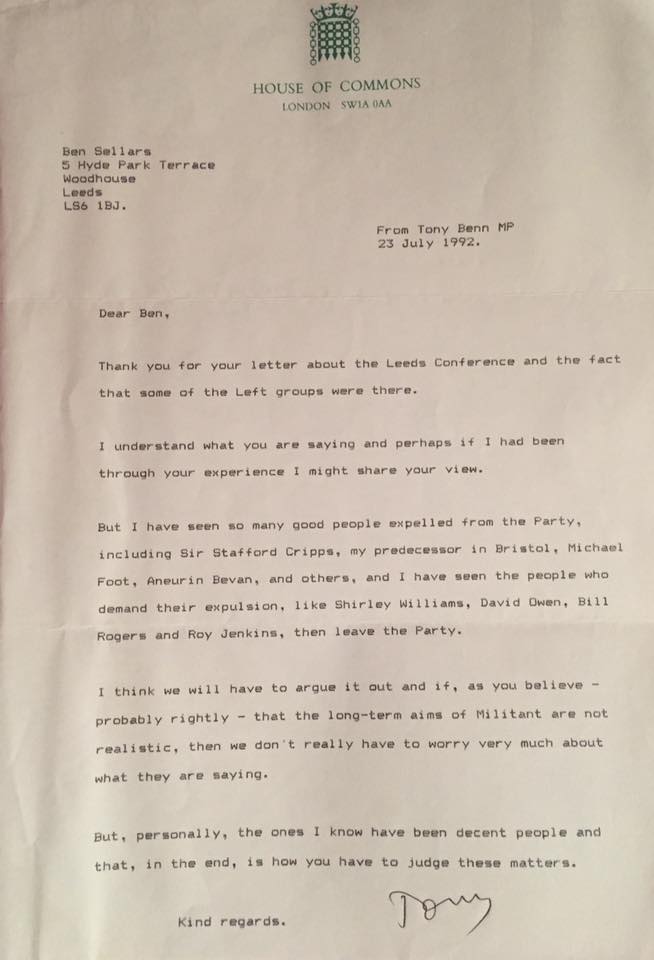 “…rank and file people sometimes join Militant out of despair with the party – and I am always in favour of contact across the whole spectrum of opinion in the party.”

Actually, the detail of what he said is less important than the general thrust, which was: stop worrying about what they are up to and focus on what you can do, what your contribution is and can be. Don’t sweat the small stuff.

It took me a long time to understand this. For years after leaving Militant, the minutiae of what they said seemed significant. Because the important thing about obsessing about Trotskyism or any other philosophy within the party or the left, and prioritising the defeat, organisationally or otherwise, of smaller groups within the Labour Party, isn’t what it does to them, it what it does to you and your politics. Once that becomes a focus, it’s both a poison (it paralyses positive organising approaches) and a repellant (to those not in the know, or those not interested).

There is a reason why people like Tony Benn, John McDonnell and Jeremy Corbyn have not devoted their lives to ‘clearing out’ Trotskyism or any other sectional group within the Labour left. It is because they recognise the corrosive effect on our own politics of that particular cul-de-sac. 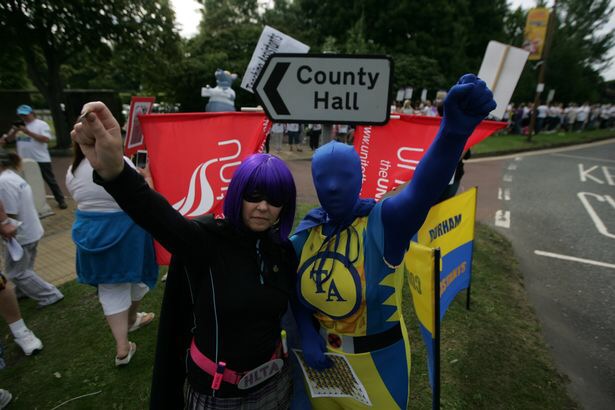 While I understand the focus on strike action (and that some people are disappointed that one strike day been called off and others are likely to be called off next week to make way for negotiation), I think this is slightly missing the point about the Durham Teaching Assistants dispute on two scores:

Firstly, the point of any industrial action and the campaigning that goes with it is to get your employer to the negotiating table. It’s almost unheard of for that action to bring a complete surrender, but Durham County Council, who said that they couldn’t regrade one group of staff, who said that they were bound by equality legislation and who said that they had made their last offer, were dragged kicking and screaming to the negotiating table this week, making significant concessions on dismissal notices and timescales along the way. There’s still vigilance needed, because Durham County Council have hardly shown themselves to be a trustworthy employer over the last year, especially in terms of this dispute. And, of course, they have attempted to couch it in legalistic language which makes their climbdown look less drastic, but compared to where we were just a couple of months ago, these are major steps forward, achieved almost entirely by the campaign run by a grassroots TA committee.

Secondly, though, the focus on strike action is misunderstanding the significance of the Durham Teaching Assistants campaign – what is different about it and why it has achieved so much in such a short timescale, and with only four days industrial action so far. That’s because their real leverage was never about the actual withdrawal of labour. Ultimately, schools can deal with a certain amount of disruption, albeit damaging to the children’s welfare and education. But what is really significant about the Teaching Assistants isn’t the fact that they were prepared to strike, but that they built an enormous, visible and hugely engaging public campaign, which backed the council into a corner on a number of levels.

Unlike many other union campaigns, the strikes are not the decisive factor. It’s the collective efforts of all the TAs in building this almighty, in-your-face, campaign which has made the difference: and that’s why, I believe, it has been such a success (where many other similar disputes have failed to get a result). None of that campaigning needs to stop, nor should it. And if people keep united and in touch with each other, keep organising together and maintain this incredible united front, the TA campaign will be ready to whip up a storm again, including strike action, when needed. That also includes putting pressure on Unison and their regional officials if needed.

A big, underestimated factor in industrial disputes and wider campaigning is confidence. When people see the results of their actions, their confidence increases and they feel they can take on the world. Quite often, we forget to celebrate our wins, whether they are big or small ones. Forgetting to do that can lead to despondency or negativity, which is the opposite of what the #ValueUs campaign has been about. This is no substitute for bring realistic. We can’t go around calling defeats victories, but we do need to understand the big picture. To do that, we need to be confident and strong – about what we’ve achieved and what we can do again. That’s why, in my opinion, it was important to celebrate what the campaign had won in dragging DCC back to the negotiating table over the last week, all the time warning that this isn’t the end, only one battle in the war.