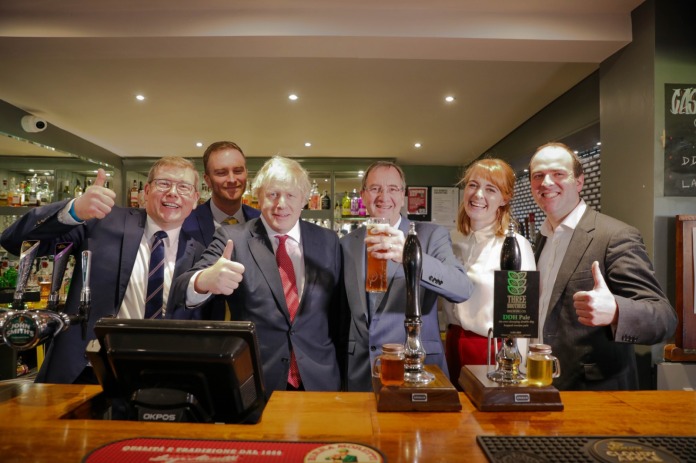 Almost by chance, yesterday, my attention was drawn to a tweet by a local BBC reporter, Fergus Hewison, which described Richard Holden’s response to an interview by Keir Starmer, where he talked of the constituency he now represents, North West Durham, as being “left behind” under its previous Labour MPs. Holden is the guy who beat Laura Pidcock in the election in December. I was working for Laura throughout her time as MP there.

Even on the most obvious level, it’s a nonsense statement, of course – the sort that politicians make all the time. Most fundamentally, if we’re going to describe North West Durham as being “left behind, the most important event has to be the closure of the Consett Steel Works by the then Conservative Government, led by Margaret Thatcher, in 1980. It’s both bizarre and economically illiterate to blame individual Labour MPs for the position that the constituency is in, whether that be Laura, or Pat Glass before her, or Hilary Armstrong before that.

The closure of the Steel Works, and the fact that there was no plan beyond the closure, the fact that associated industries closed along with the steel works, created a vicious spiral that made Consett and the surrounding areas an unemployment black spot for decades afterwards. When the jobs did come back, they were often unskilled and insecure, and often outside the immediate area. These aren’t controversial opinions; they are backed by the long-term analysis.

Most people in North West Durham understand this history. They’ve seen the real meaning of being “left behind”, as it has played out in their families, in their communities, in the high street. While unemployment levels have dipped over recent years, the constituency has a real issue with low pay, with some of the lowest average wages in the North East, as well as the country. Consett’s story is intimately bound up with the economic story of UK PLC: the decline of heavy industry, the abandonment of manufacturing and its replacement with low paid, service-led, insecure employment.

But there’s something else going on here. Holden’s statement isn’t simply a lazy mistake, it’s an attempt to embed a very different narrative and that requires some explanation. In December in County Durham, three so-called “Red Wall” seats fell to the Tories. Bishop Auckland, North West Durham and Sedgefield are very different types of constituencies, but all are long-standing Labour seats which swung dramatically from Labour to Conservative in December. This isn’t the place to discuss why, but those are the facts.

But despite sweeping to victory in those seats, the Tory MPs elected into those seats will know they are not secure. The underlying economic factors noted above, added to the fact that all three seats are ill-prepared to deal with another economic downturn caused by a combination of Brexit and COVID-19, make it quite likely that these new MPs (Richard Holden in North West Durham, Dehenna Davison in Bishop Auckland and Paul Howell in Sedgefield) are going to have a rocky ride between now and the next General Election.

The cold, hard truth is that these ‘Red Wall’ Tories, for all their bluster, are going to find it hard to represent their constituents in the traditional sense. This Government’s deregulatory, small state, free market agenda – a continuation of Thatcherism with some Steve Bannon-style populism thrown in – isn’t exactly designed for constituencies that desperately need support, whether that is investment, or a strong support networks via the social security system. So, what can they offer, instead?

Well, that’s where the this attempt to muddy the waters about the role of an MP comes in. To these Tories, if they bring a Metro line (doubtful), or a retail warehouse to the constituency through their contacts, that’s the job done. Actually, the reality is that any investment that comes into a constituency is complex and will have more to do with the economics of the region and sub-region, planning done at a county, national or even international level, than the actions of any MP. MPs are not Mayors, nor are they heads of local authorities. They can have an impact, but it will mostly be in a supporting role.

But, as has been illustrated over decades now, presentation is all in right-wing politics. And if they can’t deliver on those transport links or the big investments, they can at least make an awful a lot of noise about them. If these ‘Red Wall Tories’ can present an image of themselves in a business role – or as an ambassador for their brand, they may kid people that they are bringing economic regeneration, even when they are not. In essence, it’s a recasting the role of an MP as the CEO of a company, with the Tory PR machine behind them.

On a deeper level, however, this is a fundamental misunderstanding of the role of a Member of Parliament. As an MP, your primary role is to represent people. Of course, it’s incredibly complex in practice, but the number one function has to be a democratic one. That is what you are judged on at election time. Yes, of course, sometimes as an MP you can make an impact locally. You can support local growth, you can involve yourself in projects that develop communities and local economies, but central Government always holds the purse strings and will always have far more influence than any individual MP.

As an opposition MP, this is even more the case. Many Tory MPs are seriously rich, and even where they are not, they have connections to money, through the Tory Party, big business or the old private school network. Of course, that can bring benefits. It can deliver shiny things. For Labour MPs, especially those who’ve come through the trade union route, or low paid jobs without a lot of influence, the challenges are different, as is the role. In opposition, no Government is going to send investment your way (in fact, quite the opposite).

For an opposition MP like Laura Pidcock, the role was clear: (a) to help people with issues on an individual level the best you can; (b) to represent your constituents in Parliament – by both exposing the faults in the system and (c) by campaigning on their behalf to create a better society – which is what Labour’s transformational programme contained in the two manifestos of 2017 and 2019 was all about. But, at the heart of that role – until you go into power, is the knowledge that central Government ultimately hold the cards. That is a political reality, and that needs to be spelled out to those constituents.

I suspect that the representative, democratic role of an MP will increasingly become a nuisance and a distraction to these new ‘Red Wall’ Tory MPs, because they know – as ideological right-wingers – they can’t deliver on that. Some of that is already coming out, for example, in Richard Holden’s declaration that his Facebook page is not a place for “political debate”. They can’t change the political direction of this Government; they can’t campaign against its decisions and they will find it very hard to make a case for regional investment based on the last 10 years.

So, the PR job then becomes an attempt to throw around myths about that democracy and representation is. Labour “let the North East down” plays nicely into broader grievances and the wider perception of MPs not doing enough for their constituencies (and too much shouting about them). It also taps into a popular scepticism about how politicians behave.

I’ve lost count of the time I’ve heard the phrase: “why can’t we knock some heads together and get you all to work together”, as if this was a dysfunctional corporation, not politics with different ideological views of society and our world. But that myth is strong – and Tory MPs play up to it equally strongly, while all the time forcing through a clear, free market ideological agenda on our country. It’s sleight of hand and fertile territory for the Tories. The Red Wall Tory MPs will get fluff pieces in the press proclaiming their local successes and, boy, will they milk them – as a means of distracting from the democratic deficit.  As a party, we must not stand by passively, normalising this spin. We have to challenge it, explain and educate, every step of the way.

One thought on “‘Red Wall’ Tories”