This post is partly a follow up a previous one posted on the People’s Bookshop blog just about a year ago, which was itself a reaction to some pretty cack-handed officialdom in the run up to last years Workers Memorial Day event in Stanley Crook, County Durham. For the background, see the article here. 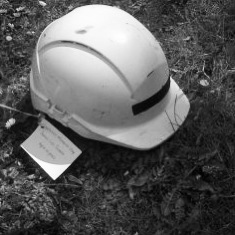 Once again, as Workers Memorial Day approaches, Durham Police and Durham County Council have managed to create a controversy where none existed. Veteran trade unionists in Durham will recall how the joint trades councils in the county have organised a Workers Memorial Day (WMD) march in Stanley Crook for several years without incident or problem – either from the authorities or from the village itself. The County Durham commemoration of WMD is held in Stanley Crook partly in recognition of St Thomas’ Church’s commitment to the event (the church also has a Workers Memorial window). The march and service has become a tradition which brings trade unionists and their banners to the quiet County Durham village to pay tribute to those men and women who have died in the course of their work, as well as highlight the dilution of health and safety legislation and the continued cuts to the Health and Safety inspections budget which sadly means that more deaths are likely to happen in 2013 and beyond. The message of the day is very firmly: ‘mourn the dead & fight for the living’. The event has recently involved Families Against Corporate Killers (F.A.C.K) who campaign to stop workers and others being killed in preventable incidents and direct bereaved families to sources of legal help and emotional support.

Suddenly, after years of untroubled and peaceful events, last year the police said that marchers would be arrested if they carried their banners through the village (even if they walked on the pavement). The council said that the organisers had to apply for the a road closure at a potential cost of £3500. Obviously, the trades council (County Durham Trades Union Council has recently been formed from several smaller trades councils in the county) simply doesn’t have that kind of money. Far more importantly, though, the process of road closures essentially entails being fleeced by a private company – and this for a road closure in a quiet village that welcomes the marchers and the memorial event.

This year, the police have not intervened directly, but the Safety Advisory Group (SAG), consisting of Durham County Council and Durham Police, have said that the organisers are “liable if anything goes wrong at the event”. Again, they have suggested road closures as the solution – at a princely sum, of course. Linda Whelan, spokesperson for F.A.C.K and  a brave campaigner whose son died in a tragic accident in 2002, has been told that she is liable. For the story, see this article in the Northern Echo:

This is a new and worrying turn of events. However, it’s not just isolated to County Durham. In the North East, we are constantly hearing of new financial charges made on protestors and the organisers of labour movement events. All over the country, marchers are being asked to fund road closures (no matter how small the march or how cash poor the organisation). Mostly, these safety measures or “services” are not provided directly by the council, but by private companies – whose primary aim is profit. 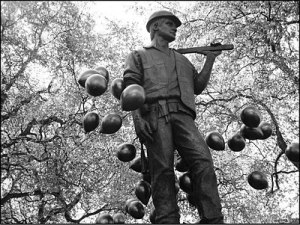 Whether it is deliberately designed to prevent protest is a moot point – the fact is that this “privatisation” of protest security has the effect of making peaceful protest (or in this case a memorial march and service) more difficult and potentially prohibitively expensive. The result is the same. If you want to have a say, it’s going to cost you. Are we to accept this? That is surely a very good question, not just for the trade union movement, but for our communities.

Some thoughts in conclusion: firstly, we have just spent an estimated £10 million on the funeral of a woman who decimated industry in the North East and who was reviled for her all out assault on the conditions of all but the most cherished workers in the country, including the health and safety regulations which save people’s lives.  Over the last few weeks, we have heard a lot of hectoring from those in power about the need to respect the dead. How does that square with washing your hands of the WMD event and telling the likes of Linda Whelan that she is responsible if anything “goes wrong”? More widely, we hear a lot of talk from both the police and the County Council about community engagement, listening to people, facilitating legitimate protest and community events. After all, they are the servants of the people and we pay their wages, right? Now, far be it from me to suggest that such talk is double-speak , but if they are going to convince trade unionists that this community engagement is more than a paper exercise, what better day to start than on Workers Memorial Day?