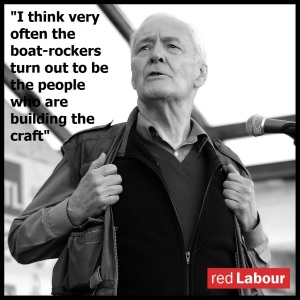 A couple of weeks ago, I wrote a piece for this blog entitled ‘Sleepwalking in the Labour Party’: about the failure of the left in the party to get ourselves organised in the context of the long hegemony of the right in the party and in the face of a Blairite retrenchment in “One Nation Labour”. The article was meant as a provocation – to ask individual party members:

“If you’re not in the party to cause trouble, considering its trajectory for the last 15 years, what are you in it for?”

The reaction was interesting. The vast majority of comments were supportive. That was the easy bit. We can hardly fail to agree on what is wrong. However, a few people asked the more pertinent questions, which were “How?”, “What now?” and “What can I do?” That article didn’t seek to answer those questions, or map out a plan of action. I want to start the task of doing that now.

Firstly, although the article was an appeal to individual responsibility for the situation we’re in, the answers can only ever be collective. Like anything else in the Labour movement, it has to be rooted in collective experience and collective solutions. I believe that some of the answers lie exactly in some of those problems we’ve experienced both as a party and a left in the party. Specifically: education; democracy and organisation. The first one is the lack of education in the party. When I say education, I don’t mean in a formal sense, but informally, through discussion in party meetings. This has all but gone – and it is a massive vacuum. Secondly, the Blairite “revolution” in the party had at its heart the closing down of democracy in the party. Blair and his friends needed this to secure their “New Labour” project. This is a clear block on any movement which seeks to change the party. Thirdly – while the right wing of the party, and the Progress wing specifically, have been extremely well organised, not surprisingly, considering the financial resources at their disposal courtesy of Lord Sainsbury, the left in the party have been fragmented, disorganised and ineffective at getting their message across and winning positions in the party.

This is not the sum of everything that is wrong in the party – far from it, unfortunately – but those three areas (education, democracy and organising) might come together in a project that attempts to grab some power back for members. A few of us on the left of the party, involved in the Red Labour Facebook group, have been talking about this for some time. That involvement has led us to the question: should there be a Red Labour in the real world? It isn’t (and never has been) a case of trying to replace anything else on the left of the party, but to gather forces and organise them with an explicit focus on the Labour Party – to give a coherence and confidence to attempts to present an alternative to “New Labour lite”. At present, there are other positive things going on in the party – the Defend the Link campaign, the Labour Assembly Against Austerity, Unite’s engagement in party selections, the continuing efforts of the Campaign for Labour Party Democracy to name a few, which will hopefully slot together with Red Labour in a virtuous cycle as opposed to the vicious cycle we’ve been trapped in for the past decade or more.

The Red Labour Facebook page began its life just over two years ago, in June 2011. In a couple of years of existence, it has grown to become the largest Facebook group on the left of the Labour Party. At the time of writing, the Red Labour page is ‘liked’ by (as in followed by) 4,693 people. Compared to other broadly Labour-left orientated groups, it is now the largest by quite some distance:

Granted, we’ve still got some way to go before hitting the Labour Party’s 147,675 likes, but we’ve gained nearly 2,000 followers in the last 2-3 months, so who knows what’s possible? What is significant too, is the amount of ‘buzz’ that there is around Red Labour. At the time of writing, 14,389 people were “talking” about Red Labour on Facebook (i.e. interacting in some way with the group). This compares to the 6,124 talking about the Labour Party on Facebook.

Red Labour creates online discussion about Labour movement politics. We have aimed to do so in lively and at times controversial ways. It has proved an enormously successful formula over the last two years. In the last six months, particularly, it’s been apparent that we are sitting on a phenomenon. We now regularly get 100 likes and 200 shares of our statuses, some reaching over 100,000 people on Facebook. A recent post quoting Keir Hardie on the arrival of the royal baby in 1894 reached 181,568 people and attracted 14,970 likes, comments or shares. Our interaction with those people who have liked the page grows on a daily basis.

About six months ago, in this context, we started assessing the impact of the page politically. We looked at the state of the Labour left and felt that it should be making the sort of progress that we were online. While all the time bearing in mind the difference between social media political activity and that in the movement itself, we nevertheless started to wonder about the huge void that there was for socialist education, discussion and debate in the party and how Red Labour might be able to plug that gap and help build the left in the party more practically. Over the last few months have been developing this idea while steadily building its facebook (and now twitter) presence. It seems to us that there is a desperate need for a project that takes the Red Labour approach to Labour members and supporters in different parts of the country, offering an alternative not only to austerity, but one that boldly and confidently challenges the narrowing of the political agenda in the Labour Party – offering radical alternatives and allowing members to develop and voice those alternatives in independent “Red Labour” fora. This would not be about building a membership organisation, it would be about creating forums for socialist alternatives in the party and organising the Labour left specifically.

Red Labour is a project in the making. It is not the finished article and will require building over months and years. Although it is a long term project, with education at its heart, there is now an urgency caused by the ‘One Nation Labour’s backsliding towards Blairism. The last six months have seen a clear change in the leadership under Ed Miliband as the 2015 election comes into view – and it is bad, rather than good news for the left as New Labour retrenchment gathers pace. What has also been noticeable, however, is the beginnings of a resistance in the party. We should all be wary of overplaying this, but it seems there is the start of a groundswell of anti-austerity sentiment amongst sections of the party – and not just amongst its union affiliates. This has been fuelled in particular by the abstention on workfare sanctions, the fudging of the opposition to the Bedroom Tax and most recently, the seven day ‘Wonga’ extension for benefits claimants.

A week or so ago, we decided to put that idea to our Facebook followers, hardly expecting the incredible response we got. The question was:

“If Red Labour were to move into the real world, to start to organise within the Party and to hold public meetings based around issues that ordinary people faced, would you support it? Like if you would, and also comment if this interests you.”

In under 12 hours, we received 449 ‘likes’ and 115 comments, 90% of which were wholly positive. Here are some of the typical responses

Even taking into account the obvious caveats about online activism, the response shows that there is a clear desire amongst party members (and those who have recently left) for a clear, socialist alternative in the party, popularly expressed and demanding a voice for our members. It ties in with similar sentiments echoed in the affiliated trade unions over recent months.

Practically speaking, what we have talked about is piloting a few Red Labour meetings around the country, with a broad brief to challenge both Progress and Blue Labour – as well as a developing critique Ed’s One Nation re-branding of New Labour. The real development of the project would be in the regional meetings which would come quickly after any launch. Meetings would initially be planned in areas where we feel we have some base. Each series of meetings would have policy, campaigning and organising outcomes. We could theme them for maximum impact nationally – e.g. having meetings on “free schools”, “defending the welfare state” or “tax avoidance” in several locations over a period of two week, with local media coverage – as well as all the usual social media. The emphasis would be on giving Labour Party members a voice again, gradually building confidence that we could effect change in the party.

In some ways the Red Labour name is a direct challenge to the Purple and Blue variants and therefore would have a wide appeal. This defines our approach, in a sense. The Red Labour project is based on a belief that there are thousands of Labour members and supporters out there who believe similar things to us or can be convinced by a strong, bold challenge to New Labour lite. This would not be about bringing together the 57 varieties of the left, however – it would be focused on changing the Labour Party solely. It wouldn’t be set up to compete with any group on the Labour left, but act as an umbrella and work on common campaigns and policy interventions. It would also be about engaging those five million mainly working class voters who have stopped supporting the party since 1997 and those members who have left the party in despair, but are equally despairing of the left outside the party.

It is also about organising the left in the party better – in order to challenge the bureaucratic control of the right. We would hope to attract support from the unions, whilst acknowledging that the success of the Red Labour facebook page has been based on its independent nature – and it will be important to retain this in “the real world”. Most importantly, the point of this would be that it would be grassroots-based. It would not be encumbered by the committee structure, as it would be more of a forum for our socialist views rather than a membership organisation. Red Labour would have supporters, people who engaged and contributed to the project at various levels, rather than members. Undoubtedly, there are other attempts to do similar things – e.g. on a broader scale with Unite or the Labour Assembly Against Austerity – and we see this as a positive not a negative. It shows that people are starting to stand up and are planning some kind of resistance – at last. We’d welcome joint working, while at the same time believing that Red Labour has both a distinctive approach and longevity. There is a massive leap from where we are now to a fully functioning, confident and effective left in the party. Obviously, too, there is a long way to go with the Red Labour project, but if the latter can support the former, it has got to be worth our time and effort. Please support us, help us, but most importantly, join us.

12 thoughts on “Why we need a Red Labour alternative”