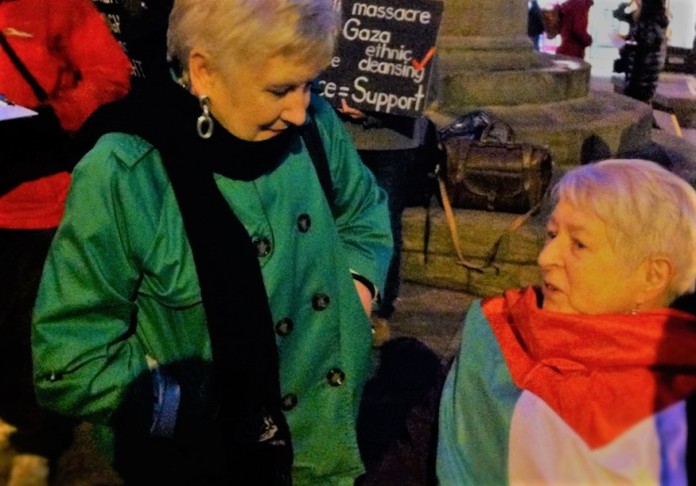 I was sitting in a pub with Charlotte, my wife, when I got the news that Pat McIntyre had died. I knew that she’d been ill, obviously. Everyone knew that, but somehow it felt like a devastating blow, a real shock. I couldn’t help myself as tears welled up in my eyes. Because, right up until the end, Pat was someone full of life, full of ideas, strategies, songs and articles – things that she wanted to do, that we should all do. She wasn’t supposed to leave us. Not at the tender age of 81!

I first met Pat through the Palestinian Solidarity Campaign in Durham, around the same time as I started working for the TUC in 2007. She was absolutely committed to that cause, as she was the Peace Movement. Her absolute honesty and humanity shone through, whether she was addressing a crowd or speaking to you one-to-one. I later got to know her better, principally through my involvement with Vin because of the People’s Bookshop connection, but also through local Labour Party activism. I would pop around to the McIntyre’s to pick up some books, and still be there 3 hours later, listening to Pat’s latest insights and enthusiasms. I didn’t regret it for a minute. There was something magnetic about Pat when she started to speak.

Pat was always an educator and took that role seriously. On numerous occasions, when talking to my colleague Paul Simpson about Red Labour, we would mention Pat as an example of the wealth of knowledge and experience that we have in Durham City, on our doorstep – and what a terrible waste it would be not to extract as much of that knowledge as possible as we started to organise a new chapter in the left’s history. Pat had done pretty much everything, politically speaking, and it showed. Now it was her turn to pass on her experience. I became a fan of her blog, Granny Grumble, which she started writing in 2010, and where she laid waste to conniving Tories and pompous Blairites in equal measure.

I remember her determination to get to the Gaza demonstration in the Market Square in November 2012. In the freezing cold, and obviously suffering with her long-term illness, she nevertheless glided down in her wheelchair and I remember her justified outrage at Israel’s bombing which has caused such an incredible number of innocent deaths and unspeakable suffering. I remember watching her and Florence Anderson talking feverishly and being overcome with admiration for another generation who really knew how to fight. Florence and Pat had been right at the forefront of the Miners’ Solidarity campaign in 1984-5.

More recently, I witnessed the fiery Pat in action at the Labour Party all member campaign meeting at County Hall, Durham in June. Being ignored by the chair and having to sit through some rather lengthy “contributions” from some of the male participants in the council chamber, Pat prefaced her speech by telling the chair exactly how long she was going to speak for, considering how long the others had been allowed to go on for. She then gave a typically brilliant analysis of the roots of the Brexit vote and the tasks that lay ahead.

Pat was an inspiration to me and so many of us involved in Labour politics in Durham. Just watching her speak was an experience – all that knowledge and determination, which wasn’t diminished at all by her illness. Of course, Pat was part of a double act, and I was and am in awe, not just of Vin and Pat’s politics, but their relationship too. Maybe that was at the core of it, and that relationship gave Pat the confidence to be the activist we all admired so much.

I realise that I have missed a lot of Pat’s ‘Greatest Hits’ – literally and metaphorically. Coming into it late, I rely on what numerous other socialists have told me, but it all rings true: that she was a brilliant mind, a truly great speech maker and organiser of the highest calibre. Everyone you meet in and around Durham City gushes about Pat – and that is an incredible legacy to leave behind. If we want to know how to do principled, passionate and practical politics, we have our model.

One thought on “Pat McIntyre: a short tribute”